Mehackit is a social business leveraging and contributing to open source technologies and their creative use for teaching and learning.

This work is licensed under a Creative Commons Attribution-ShareAlike 4.0 International License. Based on Getting started with Sonic Pi by Raspberry Pi foundation and An introduction to Sonic Pi by Stuart Brett.

Sonic Pi is an open-source programming environment, designed to explore and teach programming concepts through the process of creating new sounds. It’s a free live coding synth for everyone created by Sam Aaron at the University of Cambridge Computer Laboratory. You can use Sonic Pi to program, compose and perform in classical and contemporary styles ranging from Canons to Dubstep.

This tutorial guides you through the basics and more of Sonic Pi. At the end of this tutorial you’ll be able to create something like this:

Sonic Pi is all about exploring. There are no mistakes, there are only discoveries. And most of all, it’s about having fun. So remember this: have fun, explore and hack away!

If you don’t have Sonic Pi installed, go to sonic-pi.net, download and install Sonic Pi. It is available for Windows, OS X and Linux operating systems.

Next, fire up Sonic Pi! Let’s see how it looks like.

This is the Sonic Pi interface; it has three main windows. The largest one is for writing your code, and we call it the Programming Panel. There is also a log panel that displays information about your program as it runs. When you click on the help button at the top of the window, the third panel appears along the bottom displaying help documentation. This contains information about the language for programming Sonic Pi as well as different synth sounds, samples, and much more. There are also plenty of ready-to-go examples that you can try and use! 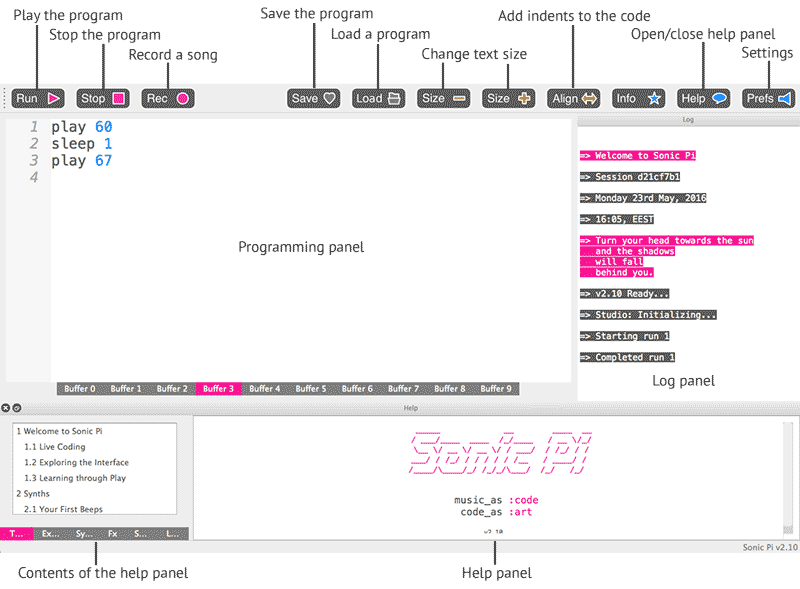 Let’s start with programming Sonic Pi to play a note. Select the Buffer 0 tab and type:

Press Run from the upper left corner. Can you hear a beep?

Try different values. Write for example play 50 or play 70. How does the sound change?

Now try to write pley 60 and click run. What happens?

This is an example of a bug in your code. In later activities, if the error panel displays text you will know that you have a bug that you need to fix. It could be that you have misspelt a word like play.

The numbers you used are MIDI notes. MIDI is a useful way to compose and is a useful tool for quickly testing your notes and adjusting them by lowering their value (making your note lower) or increasing it, (making the pitch higher). Sonic Pi is familiar with both MIDI note numbers (values between 0 and 127) and traditional musical notation (such as :C4, :Eb3 or :G5).